Mandatory Nonfinancial Reporting in the EU

As a result of new regulation in the European Union (EU), in 2018 many companies will issue their first annual reports containing mandatory nonfinancial disclosures. The new regulation, Directive 2014/95/EU, was introduced in 2014 and requires certain European companies to include annual nonfinancial statements on sustainability and diversity either as a part of their management report or as a separate document. The directive applies to large public-interest entities with more than 500 employees and is effective for financial years beginning on or after January 1, 2017. Public interest entities include listed companies, banks, insurance companies, and other companies designated as such by authoritative bodies. Entities are not considered large, and are therefore exempt, if they do not meet certain minimum asset, liability, or revenue criteria; for companies with 500 or more employees, however, it would be difficult for these amounts to be small enough for the exemption. It has been estimated that 6,000 companies are subject to the directive.

Directive 2014/95/EU requires covered companies to report on policies, risks, and program outcomes related to environmental protection, social responsibility and treatment of employees; respect for human rights; anticorruption and bribery matters; and diversity on company boards, with respect to age, gender, education, and professional background. Companies should include nonfinancial statements as part of their annually issued financial statements and management report, although companies already issuing a separate nonfinancial report covering the same period and content are exempt from this requirement. The purpose of this article is to provide an overview of the current status of the implementation of the directive in Europe and the implications for CPAs in the United States.

Implementation of the Directive in EU Member States

The European Union, as a supranational organization, does not create new law; rather, it provides a framework for the EU member states, which must develop and impose the legal requirements for the business entities. While each country must follow the general guidelines laid out in the directive, the different member states are allowed some discretion with regard to the definition of the companies subject to the rules, the audit/attest requirements, and the related penalties.

The deadline for individual member states to codify the directive into law passed in December 2016; thus, at this point it is possible to provide an overview of the different standards across EU member states. A recently published study (Enterprise 2020 CSR Europe, GRI, and Accountancy Europe, Member State Implementation of Directive 2014/95/EU: A Comprehensive Overview of How Member States Are Implementing the EU Directive on Nonfinancial and Diversity Information, 2018, http://bit.ly/2K8muhC) summarizes the current status of implementation for all 28 member states and the two European Economic Area (EEA) countries, Iceland and Norway, as of April 2018. According to this study, the key areas that exhibit differences across the EU are as follows:

In summary, while countries have adapted some aspects of the directive, most rules were implemented in some form.

Reports Issued in Compliance with the Directive

Because Directive 2014/95/EU is effective for years beginning on or after January 1, 2017, public interest entities meeting the size thresholds and issuing reports during 2018 for the 2017 financial year must now comply. Companies subject to the directive should include non-financial reports either within their management report or as a separate document. Exhibit 1 illustrates the nonfinancial reporting method for a sample of EU companies and provides links to the companies’ nonfinancial reports. 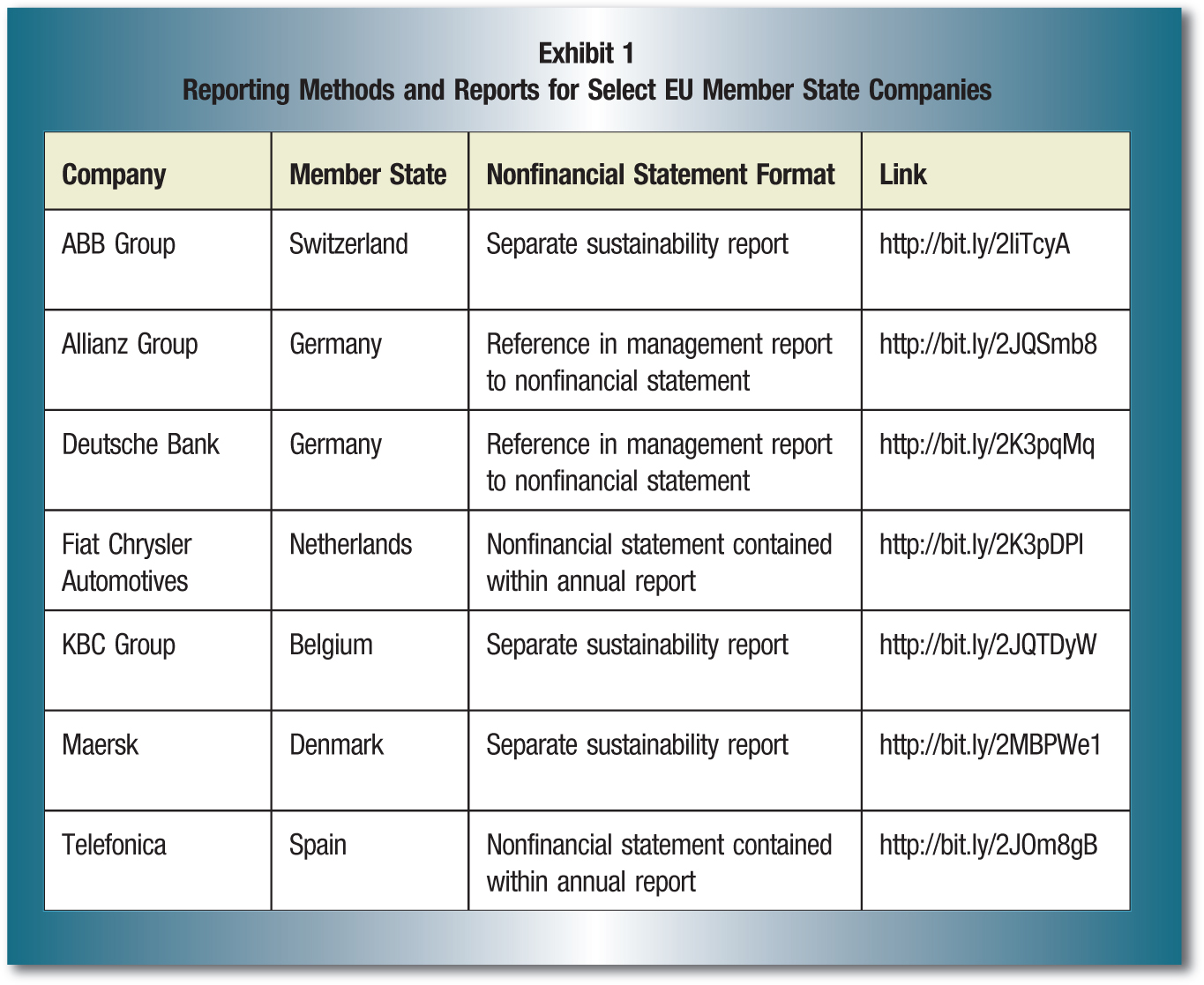 Currently, there are no U.S. regulatory requirements for U.S.-based companies to prepare the mandatory nonfinancial disclosures specified in the directive or to prepare any type of corporate social responsibility report (with some limited exceptions, such as required disclosures about mine safety and conflict minerals). U.S. companies that operate in EU countries and meet the reporting standards will, however, have to follow the nonfinancial reporting requirements. This may not be a major change for some of these businesses, since many of the largest U.S. companies already prepare these types of reports. Exhibit 2 lists a sample of U.S. companies with significant operations in Europe that currently (and, for some, for multiple years) prepare some type of non-financial disclosure document, with links to the various reports. 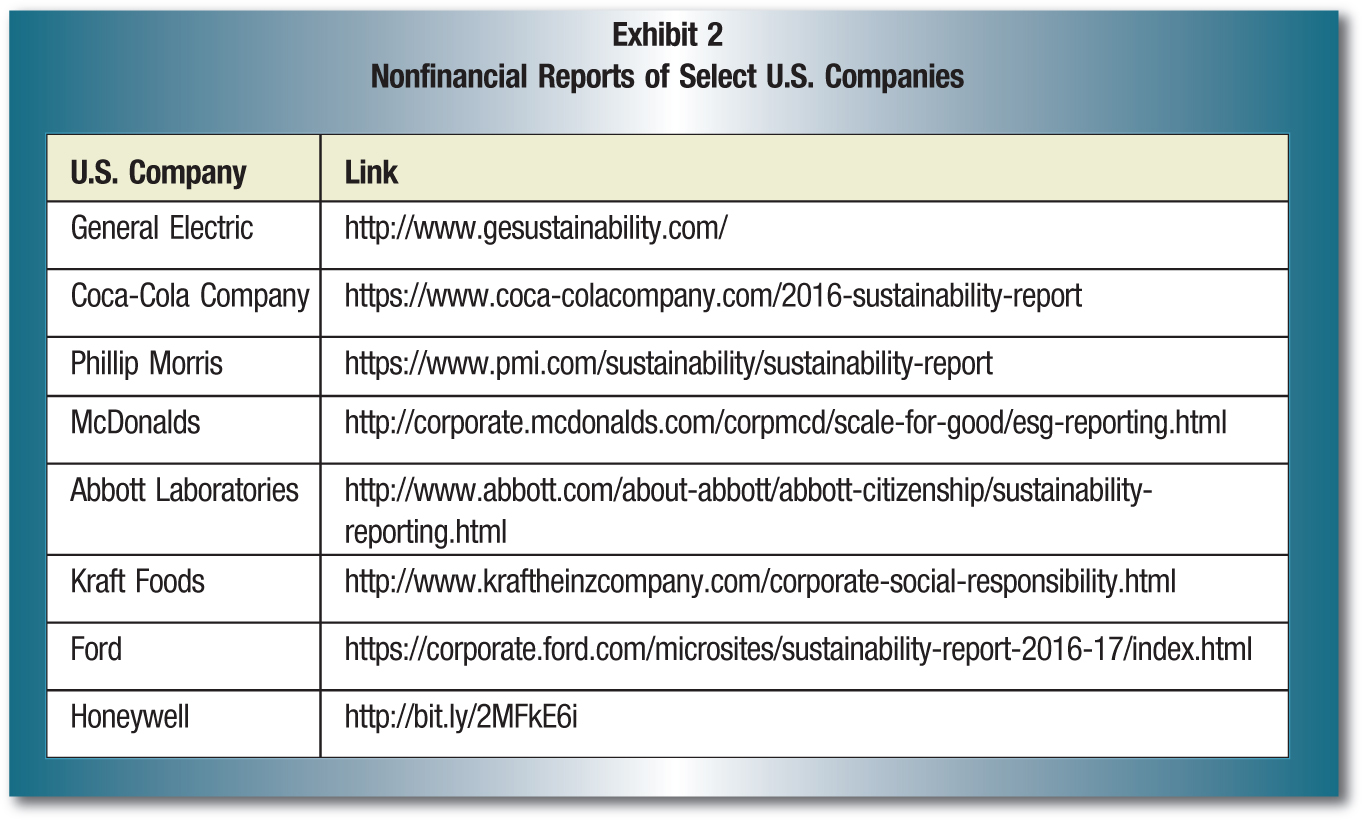 Implications for CPAs in the United States

Depending on the country in which the U.S. business operates, different rules will apply; however, most countries require that an audit firm verify the existence of the nonfinancial report. U.S. companies may not be aware of this requirement and may not know what kind of penalties would be imposed upon them for not providing the report. Because auditors of the financial statements will likely be responsible for this, they need to make sure that their clients are in compliance.

Although currently only the existence of the report must be verified, the language in the directive leaves member states open to require auditor verification of the content of the nonfinancial reports: “Statutory auditors and audit firms should only check that the non-financial statement or the separate report has been provided. In addition, it should be possible for member states to require that the information included in the non-financial statement or in the separate report be verified by an independent assurance services provider.” U.S. auditors should be prepared for this and may want to take this opportunity to discuss with their clients how they can use their nonfinancial reports to create a competitive advantage. With more international companies now issuing nonfinancial reports, auditors can help their clients improve the credibility of their nonfinancial reports by validating the contents. Thus, companies (with help of their accountants and auditors) can differentiate themselves by not only broadcasting how they address environmental, social, human rights, anticorruption, and diversity issues, but also enhancing the credibility through the provision of external assurance. Understanding the requirements of the directive can put U.S. CPAs ahead of the game in the event the United States follows suit and begins requiring nonfinancial reports or external assurance of nonfinancial disclosures.

Back to main page